Next week, it will be Lucas’ christening and I’d like thank you if you are thinking of giving my little babi a gift.

But remember, it is your presence that will make us happier.

Time flies so fast, now my baby is one month old. I took some photos of him and I am disappointed that I only like these two. I need a trigger I guess so that I can place my slave flash in more positions. 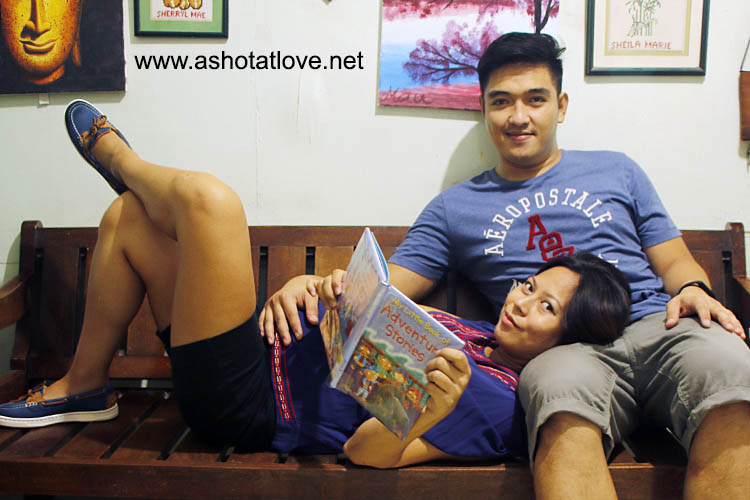 Spending money to buy photography equipment (flash and remote) to take self portraits rather than availing a maternity photo shoot package is more practical for us.

We did a test shoot to try out our new purchases. The Shanny flash was giving us enough light but my trigger is not compatible with it so we needed the cable to use it. This limited us in using the light in our desired position. The 300-peso generic remote did not do its job well so we have ended up using the camera timer. We only got these few good photos from the test shoot. 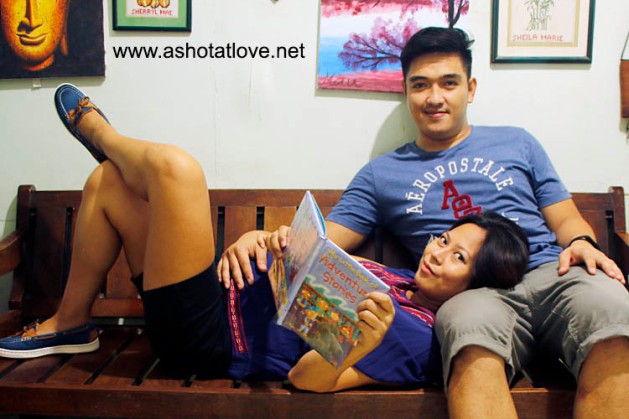 When I was 30 weeks preggy and my cousin was on her 32nd week of pregnancy, I was able to take outdoor maternity photos of her and her husband. Natural light really rocks. 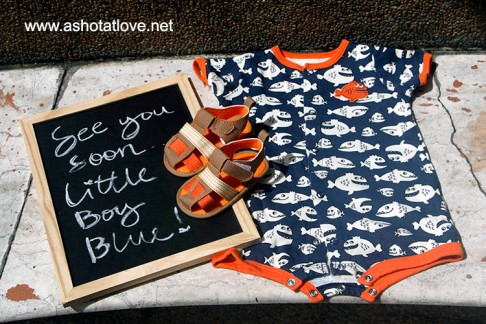 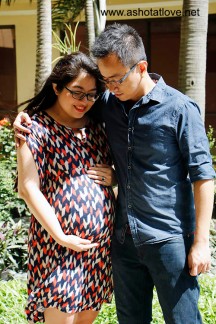 Taking self portraits are more tiresome though most of the setup was done by Lalab. Too bad we were not able to master the equipment we have for another shoot before I gave birth.

Like Loading...
I finally was able to drop by Hair Secret again to buy their organic hair color and try their Hair TCM – Traditional Chinese Medicine. Though there are clinics here in Philippines offering this kind of scalp treatment, this is still unknown for a lot of people with scalp problems.
Hair Secret’s TCM is very simple compared to those I’ve tried in Singapore. First, the hair attendant applied rice wine on my scalp and massaged it in. Then, the TCM was applied to my hair and scalp.

A hair spa steam machine was also used so that my hair could absorb the treatment better. After an hour, the TCM was rinsed off from my hair and scalp with an organic shampoo and conditioner. The hair attendant reminded me that shampoo and conditioner should be diluted in water before application to make them more gentle to the scalp.

Lastly, my hair was blow dried with a warm temperature to avoid any scalp or hair damage. My hair became easier to comb after the treatment. My scalp felt clean, and my hair felt naturally smooth, soft and lustrous.
This treatment is recommended for people with thin, balding hair, and they even got feedback that some of their clients’ gray hairs became darker. It is 100% organic and good for anyone. We have to be careful about taking care of ourselves. We should remember that beautiful hair starts from a healthy scalp.

I was on my 23rd week of pregnancy when I decided to throw a very casual baby shower or rather a gender reveal. It was a little too early but it’s also a way for me finally meet some friends whom I was not able to see for quite some time due to my condition. Besides, I know how excited they are for me.

We went for a congenital ultrasound early in the morning. Guess what? It’s a boy! Wish granted for me, though whatever gender is ok. All we’re praying for is a healthy baby. We hurried back home to cook and prepare for the gender reveal. Our guests came late which gave us enough time to cook and prepare.

Lek helped me do a simple wall decoration and prepared some games. The foods we prepared are more like comfort food. I prepared a potato salad casserole and fruit salad, bought a banana cake and brownies from bakeries and Jayson cooked French fries and Pansit. He also made some home-made peanut butter in case they want some sandwich.

The games that Lek prepared were so fun and so suitable for my Maersk friends. There were four games:

1. Create our Baby’s face – My 8 guests were grouped by pairs. They were given an A4 printout of my face and Jayson’s face and another paper with a baby’s face shape outlined. They had to come up with a baby’s look out of our faces. Best creation wins. For this game, Natz and Era won. 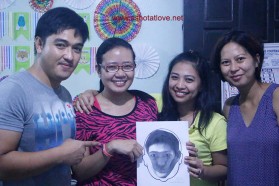 2. Charades – This is a game in which players had to guess the title of a song or movie with the baby word in them from pantomimed clues. We grouped them into 2 and it was Era, Natz, Joy and Rhianne who won the game.

3. Guess the Song title – There’s a team representative for every round who will pick a song title and an animal sound he/she can use to sing some lines from the song. Team members have to guess the song within a minute. If the team members were not able to guess the song, the other team can steal to get a point. It was the same group who won this game.

4. Guess my Baby’s Name – I told my guests to get a piece of paper and a pen. I told them a clue for my baby’s name. Barang who was actually the first one to give me her guess won the game. 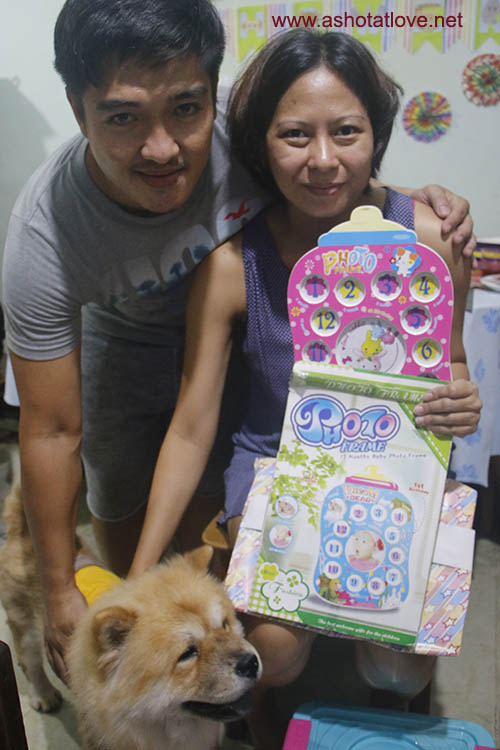 Those were all the games that we did. By the way, my best friend’s mom and sister also came. I think I spent almost half an hour to open their wonderful gifts for my baby! It was evening already when we finished and my friends were still full to eat dinner. Too bad my high school friends were not able to come.

Hereditary premature graying hair has been my problem since I was 16 years old. So, as soon as I reached college, I started coloring my hair to cover the gray hair. And as my hair grows fast, I regularly do it every 4-6 weeks.
Now, I am 18 weeks pregnant and this problem of mine got bigger because, as we all know, hair colors are made with a lot of chemicals. Even those hair colors from natural product stores still have a minimum amount of ammonia.
Luckily, I found the Beauty Secrets Clinic over the internet. This clinic, like its name implies, offers the secret for healthy beautiful skin and hair, whatever your health condition is. Their hair color is made from organic ingredients and is chemical-free. 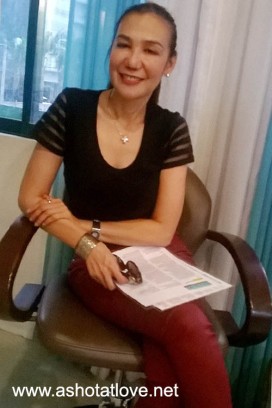 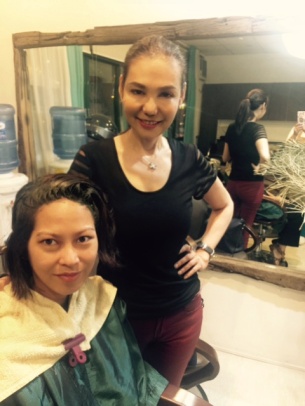 Ms. Jinnie Uy, owner and director of Beauty Secrets clinic, is a health advocate. She strongly believes that “prevention is better than cure” and we are what we eat. The chemicals in the products that we use and eat destroy our healthy cells, thus causing sickness like cancer over time.

The hair color (Radico Colour Me) looks and smells organic. It covers virgin hair easily, but if you’ve been doing hair color or other salon treatments before, the first dose of hair color will not cover the hair entirely as it will neutralize the chemicals you still have in your hair. You have to come back after a couple of days for another round.

Beauty Secrets Clinic has a section for Hair Secret Organic Clinic which offers hair services. The organic hair color costs P2,500 and above, depending on your hair length. You can also buy their hair color product which is on promotion at the moment — a box weighing 100 grams costs P3,500, which is normally P5,000. It will be good for 2-3 uses depending on your hair length.
Radico Colour Me didn’t stain my skin and towel after my bath as well. It is neither itchy nor harsh in the scalp. Though the dye tones are limited, it is 100% safe. It solves the hair dye problems of pregnant women like me, and even cancer patients and survivors.

I  was finally able to try an adult coloring book. I did a page with an illustration of Japanese lanterns hung up on a garden. The details are so elaborate and it took me a day to finished it. It was a way to distress for some people but I found it stressing as I colored small details and tried to make the shading of the colors even. I wanted to stop but I can’t leave it unfinished. I was telling myself not to do it again as I was coloring. I’ll rather draw, paint or color Sam’s coloring books.

To prove myself that it is better to draw, this morning, I grabbed my untouched canvass pad that I bought a few years ago and a pencil. I looked for pregnant women’s photos in the internet for inspiration and started to draw. After almost three hours, taaddaaa! Here’s my artwork. It’s simple but I was so happy with the outcome since I can’t even remember the last time I drew or painted. A good alternative for photography.